We study diversity and globalization under the conditions of pre-modern interaction and communication. The spatial and chronological focus is on the Roman Empire which can be regarded as the first global empire, since it comprised parts of three continents: western and southern Europe, northern Africa and the Levant. The areas with which it was in contact stretched far beyond this core area, to Scandinavia and India. We also take into account the Hellenistic kingdoms and the Achaemenid empire both as forerunners and as a contrast foil.

For our purposes, diversity is not an ethical postulate or a political goal, but a social construct which is culture-specific and subsequent to change over time. We ask how cultural diversity was perceived in antiquity and how it was dealt with: Which differences were perceived, which became the subject of discourse or were excluded from it? Which differences were valued, tolerated or sanctioned? The Roman empire was highly diverse, the differences in respect to ecology and economy, society and cultural were enormous. On the other hand, the empire caused a very high degree of transcontinental interconnectedness in several areas. Against this background, we also ask what repercussions these processes had on the production, perception and evaluation of cultural differences: How did the degree of globalization interact with the way diversity was negotiated?

The interrelationship between globalization and diversity has not as yet been studied systematically across disciplines focused on the Ancient World; phenomena of cultural diversity have usually been studied in isolation. The research forum thus brings together many disciplines, historical, philological and theological, which are separated by their institutional affiliation, but have a common focus on the Ancient World. Discussing the cultures of antiquity from the perspective of diversity and globalization, they have the potential to add a historical dimension to current debates about this controversial issue. 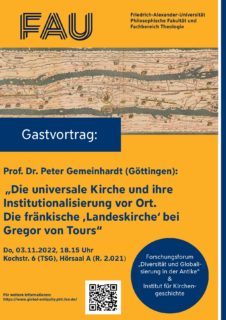 The group Global Antiquity and the Institute for Church History invite to the guest lecture held by Prof. Dr. Peter Gemeinhardt (Göttingen) with the following subject: "The universal church and her institutionalization on site. The franconian 'Landeskirche' at Gregory of Tours". The lecture will be ... 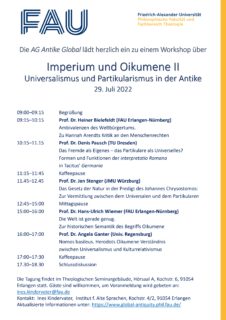 On July 29, 2022, the group Global Antiquity will hold a conference with the following subject: "Imperium and Oecumene II. Universal horizons and particular contexts in ancient societies." The conference will take place in the theological seminar building, lecture hall A, Kochstr. 6, Erlangen. If yo...

From 27 to 29 September 2021 the group Global Antiquity held a conference with the following subject: "Imperium and Oecumene. Universal horizons and particular contexts in ancient societies." For the full program see here.